Experimental Climate Monitoring and Prediction for the Maldives – March 2021

Monitored: During February, the southern islands received above normal rainfall while the central and northern islands received less. Over the 365 days, rainfall exceeded climatology by 27% in the Northern islands; deficit by 15% in the Central islands and the southern islands are close to normal.
Predictions: With weak La Nina conditions established; dry conditions are set to prevail across Maldives from April-June 2021. The seasonal temperature remains climatological – perhaps the La Nina influence is countervailed by the prevailing anomalously warm ocean surfaces by the Maldives. 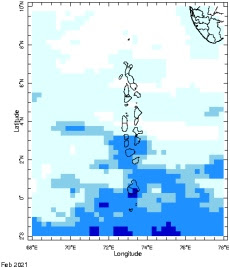 shows for: Northern islands: Excess of 400 mm from an average of 1450 mm average

Central islands: Deficit of 250 mm from an average of 1700 mm average

Southern islands: Excess of 200 mm from an average of 1750 mm average

In early-Mar 2021, the tropical Pacific remained in an ENSO-neutral state, although SSTs in the east-central and central Pacific have cooled to the threshold for La Niña while the atmosphere continues to maintain largely ENSO-neutral patterns. The collection of latest ENSO prediction models indicates ENSO-neutral or weak El Niño as two possible scenarios during Northern Hemisphere spring 2021. The official CPC/IRI outlook slightly favors La Niña development, and carries a La Niña watch. (Text Courtesy IRI)

0.5 0C above average SST was observed around Maldives.
Predictions