Compared to the past 10 years rainfall has been significantly low for all of Maldives this year, particularly between the period from February to May. Rainfall in the past 365 days has been less compared to the average rainfall recorded for the past 8 years with the exception of the period October 2011
to January 2012, in Northern Maldives, where the average rainfall has been almost the same as previous years. An above average cumulative precipitation is only observed in Northern Maldives. For Central Maldives the deviation of cumulative precipitation from the average value continues to increase while in South Maldives the decrement remained almost constant during past 365 days. 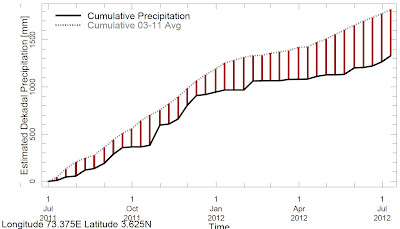 Image: Cumulative precipitation in Central Maldives in the past 365 days compared to the average precipitation of past 8 years in the region
Read more »
Posted by FECT at 3:39 PM No comments: