Experimental Climate Monitoring and Prediction for the Maldives – August 2020


Monitored: During August, the whole country received normal rainfall for the season. During the last 365 days, Northern islands: Excess of 400 mm from 1300 mm cumulative precipitation average.

The sea surface temperature around the Maldives is 10 C above average. 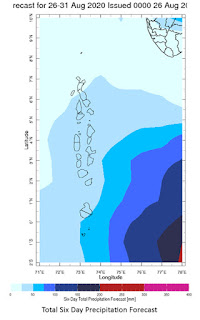