After a wet August, rainfall continues to decrease in the first half of October in North and Central islands of Maldives and drought conditions continue to persist. In contrast, the Southern islands received highest recorded rainfall in September for the last 5 years. For the October-December season, wetter conditions are predicted for central Maldives and near-normal conditions are predicted for the southern regions. Warmer than average conditions driven by the warm Arabian Sea surface conditions shall be felt throughout the Maldives. 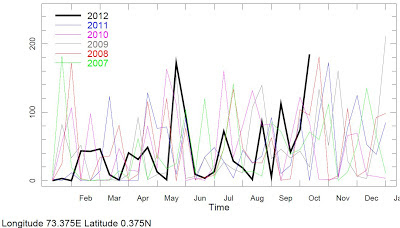