Heavier than expected rainfall was observed over the Northern and Central islands of in the second half of August and the rainfall was diminished in the first two weeks of September. However, these rainfall has not compensated for the sustained drought persisting over the Northern and .  Warming sea surfaces around and the tropical have contributed towards these conditions.  But in , where the rainfall deficit over the last year was smaller, the heavier than expected rainfall compensated for the drought conditions to some extent. 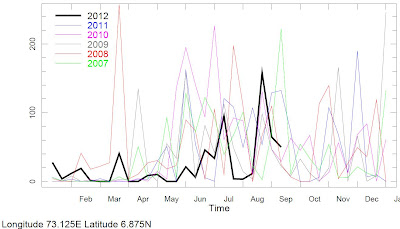 Image: Rainfall in 2012 (black) compared to rainfall in previous 5 years in Northern Maldives 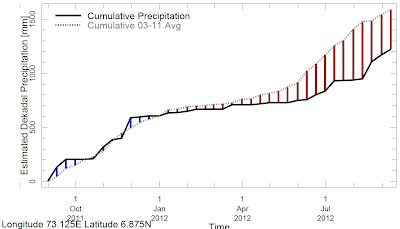 Image: Rainfall of past 365 days (black) compared to average rainfall in previous 8 years. Note the continuous increase in rainfall deficit.

The launch took place with the Vice President delivering the following prepared words.
there were various meeting in Maldives this week


Posted by Lareef Zubair at 6:40 AM No comments: