Floodwaters caused damages in 117 homes and 20 people were evacuated. 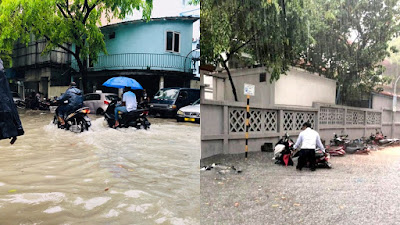 More than 100 homes needed assistance and two families were evacuated Wednesday as a torrential downpour flooded the streets of the capital.
The 223.5 millimetres of rain from 8am to 8pm was a record for the capital island, according to the Maldives Meteorological Services.
The previous record was 200 millimetres on December 11, 1998. The national record was 228.4 millimetres on the southernmost island of Gan on November 24, 2015.
The record rainfall in Malé caused flooding as many roads were inundated with up to two feet of water.
Soldiers and police officers were deployed to set up sandbags and operate pump stations. Volunteers from the local Red Crescent as well as scouts and girl guides joined the relief efforts along with staff from the city council and other offices.
Floodwaters caused damages in 117 homes and the National Disaster Management Centre helped relocate 20 people from two residences. Food and accommodation were arranged for the 11 adults and nine children at the Beehive Hotel.


Monitored: During November, most parts of the country received rainfall below than is normal for the season by up to 120 mm. The Northern Islands have been having a rainfall deficit in the last year compared to normal rainfall, that increased up to 300 mm during November.  The Central Islands have an excess of 250 mm of rainfall during last year compared to the average while the Southern Islands are having an excess of 400 mm. The sea surface temperature around Maldives is above  0.5 0C normal.
Predictions: IMD GFS model predicts up to 40 mm of rainfall in the southern islands; up to 10 mm in northern and central islands on December 3rd and 4th. On the 5th and 6th up to 40 mm of rainfall is expected in southern islands and up to 10 mm in northern islands. Long Range Weather prediction simulations anticipate total rainfall up to 100 mm for central islands during December 1st-6th.