Rainfall in Southern Maldives was higher than usual and as a result the cumulative rainfall over the last 365 days was as expected from the 2003-2011 averages. The 365 day cumulative rainfall for both Central and Northern Maldives is below expected- the drought persists although rainfall was about average during the last two months as expected during an El Nino. El Nino conditions are beginning to weaken – so the usual increase in rainfall over Northern and Central Malidves in December may be reduced. The anomalously high sea surface temperatures near Maldives shall lead to warmer temperatures over the Malidves during the next three months and associated impacts on fisheries and other sectors. 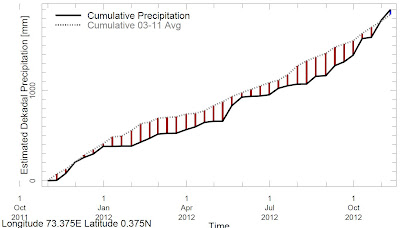