Monitored: During July, southern parts of the country received rainfall below than is normal for the season by more than 50 mm; and central and southern islands received normal rainfall. The northern islands recorded the second-highest rainfall for the period in the past six years. The Southern Islands have an excess of 500 mm of rainfall during last year compared to the average while the Northern Islands are having a deficit of 400 mm and Central islands a deficit of 100 mm. The sea surface temperature around the Maldives was 1 0C above normal. This is extremely warm. 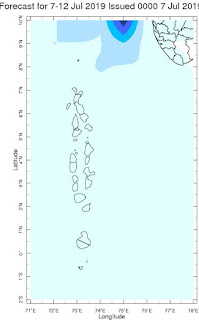