December 2012 has been a dry month for all of Maldives. The rainfall deficit compared to the last 8 year’s average has been growing for all Northern, Central and Southern islands of Maldives. Dry conditions are expected to be sustained during January. There is a higher than average chance of above normal precipitation in Central Maldives from February to April. The chances of above normal temperature, when the January to March period is taken in aggregate, is higher than normal throughout Maldives particularly in the Central Region. 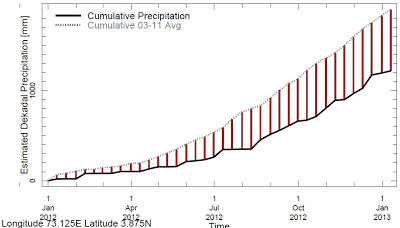