Experimental Climate Monitoring and Prediction for the Maldives – February 2021

Monitored: During January, the entire islands received less rainfall. Over the 365 days, rainfall exceeded climatology by 20% in the Northern islands by 33%.
Predictions: With weak La Nina conditions established; dry conditions are set to prevail across Maldives from February-March 2021. The seasonal temperature remains climatological – perhaps the La Nina influence is countervailed by the prevailing anomalously warm ocean surfaces by the Maldives. 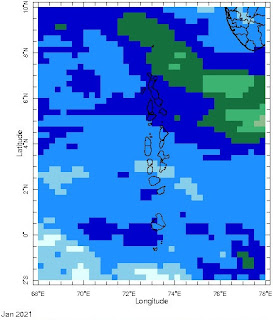 In March, northern and central islands receive average rainfall up to 50 mm while southern islands receive up 100 mm of rain. Wind is northeasterly. Usually in April, Southern islands usually receive about 150 mm of rainfall. The wind direction in southern and central islands is westerly and in northern islands, it is northwesterly. Rainfall usually increase up to 200 mm in May in the entire country. The wind direction remains the same but the speed increases.

In January, the entire islands received up to 10 mm; above-average rainfall. The cumulative rainfall during the last 365 days,

shows for: Northern islands: Excess of 300 mm from an average of 1450 mm average

Central islands: Deficit of 400 mm from an average of 1675 mm average

Southern islands: Excess of 125 mm from an average of 1775 mm average

In early-Feb 2021, the tropical Pacific remained in an ENSO-neutral state, although SSTs in the east-central and central Pacific have cooled to the threshold for La Niña while the atmosphere continues to maintain largely ENSO-neutral patterns. The collection of latest ENSO prediction models indicates ENSO-neutral or weak El Niño as two possible scenarios during Northern Hemisphere spring 2021. The official CPC/IRI outlook slightly favors La Niña development, and carries a La Niña watch. (Text Courtesy IRI)

0.5 0C above average SST was observed around Maldives.
Predictions

NOAA/NCEF GFS model predicts higher probability of below-normal tercile by 40% in the central and southern islands; and by 30% in northern islands between 27thFeb - 26thMar.